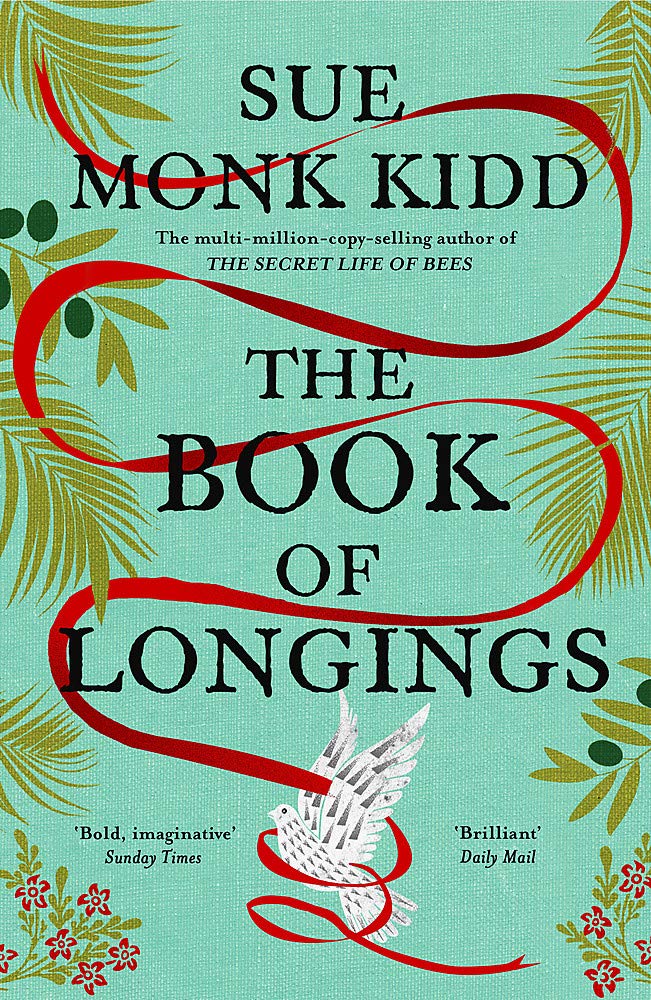 I fell in love with this book on the first page. There’s something about the way that Sue Monk Kidd writes that lulls and soothes you. Her writing flows in a lyrical, magical, poetic dance as she weaves a magical spell around the reader with a story created from a Biblical, historical, factual past, intertwined with imagined, fictional realities. Once she has captured you and lured you in, you will understand that the world she has conceived here is structured around the very nature and construct of so much that we hold dear to us today: love; God and his place in (or possibly on the periphery of) our lives; women and what they stand for; the secrets and stories that mothers, daughters, sisters and wives have kept close to their hearts, often forever unspoken, for centuries.

But ultimately, this is Ana’s story, Ana who we meet when she’s just 14 years old and living with her wealthy family in Sepphoris. Caring more about his standing in the community and how his family is perceived in the eyes of Antipas, the disliked ruler of Galilee, in whose court he holds a highly respected position, Ana’s father views her as a pawn to do with as he pleases to advance his standing with those who he seeks to find favour with. Her mother is not much better, treating her harshly, and making no secret of the fact that she is a burden to the family with her willful ways and enquiring mind. Things have become worse since her brother Judas has been banished by her father for openly speaking out against Antipas, and now her only friend and confidante in the house is her Aunt Yaltha, who is barely tolerated by her father.

We journey through the struggles that Ana has to endure living under her parents’ roof, and I founds these painful and sad to read about. Young girls had no voice whatsoever. They were literally ‘things’. Ana is five years old when she discovers that women are merely relegated to lower than second-rate citizens in the eyes of her religion, discovering that she cannot venture to pray in the same area as the men ‘on pain of death’! A dire threat indeed. She grows up battling to understand why this is so, and failing to understand why the God she is instructed to unfailingly believe in and pray to does not treat all of his creations fairly and equally. When she meets Jesus however, she instinctively and immediately knows that she has found a kindred spirit … her twin flame.

There is absolutely no doubt in my mind that this book will find itself the target of controversy, and perhaps those who seek purely to point fingers and criticise should either stay away completely or read the author’s notes at the back of the book first before reading the book. These notes give a lot of explanation as to the background of the writing of the book, the author’s frame of mind and how it all came to fruition. It really wraps it all up rather well. Although the central focus of the book is definitely Ana and the discovery of her voice and how women can be represented in society and community, one cannot avoid the fact that this is also partly a story about Jesus and how he became … well … ‘Jesus’! But rather than being an in-depth Theological investigation into the religious doctrines of his life, it’s a look at him as a man, specifically as a family man. There are theories as to whether Jesus ever married, and I won’t go into the why’s and wherefores of these ideas having been discarded due to not ‘suiting’ the religious powers that be. It was so interesting and refreshing to see him described as Sue Monk Kidd has done here, and I hope that others will see it as such. His meeting and marrying Ana served to empower him to become who he was to be. I loved that depiction!

The Book of Longings is a 5-Star read, although I feel that pinning it down and assigning stars to it seems somewhat mundane. It deserves so, so much more than that. So while I’ve given it those 5 stars, I do in fact prefer to attach generous silver wings to it, and cast it aloft into the celestial realms so that it may burst into a million glittering sparks that will shine their radiance onto the world!

Thank you to Anne Cater of Random Things Blog Tours for inviting me on this sublime journey. Take a look at what other bloggers are saying about The Book of Longings …

Sue Monk Kidd is the author of The Secret Life of Bees, one of the most beloved novels of the 21st century. It spent 2.5 years on the New York Times bestseller list, and has sold over 8 million copies worldwide. It was long-listed for the Orange Prize (now the Women’s Prize for Fiction) and made into a film starring Sophie Okonedo, Alicia Keys and Jennifer Hudson. Sue’s subsequent novels, The Mermaid Chair, The Invention of Wings and now The Book of Longings, were all New York Times bestsellers.
Sue is also the author of several non-fiction books including the New York Times bestseller Travelling with Pomegranates, co-written with her daughter Ann Kidd Taylor. Sue lives in Florida.
http://www.suemonkkidd.com Twitter: @suemonkkidd