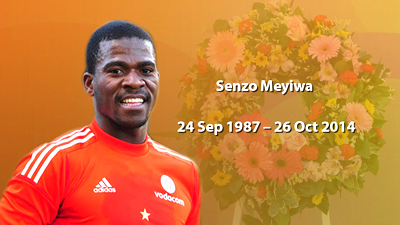 Ever since Senzo Meyiwa’s recent senseless murder I have wanted to write something about my feelings towards the way he has been portrayed as an icon of South African pride. Then yesterday it was reported on the news that at his funeral held over the weekend, he had been described as a “hero who brought dignity to our country”, and I knew that things needed to be put into perspective.

I admit, I don’t follow South African soccer (apologies to my dear friend Stan Matthews!), so I didn’t know much about Senzo, and am not sure if I’m embarrassed or not to admit that I hadn’t even heard of him until his untimely demise (I’d love to know how many white South African females had heard of him!). From what I hear about him though, it has led me to believe the following:

Well that’s great, isn’t it? All incredible traits which would definitely contribute to his ‘hero’ and role-model status, right? But wait, there’s more:

So I’m guessing that if one were to chat to his (estranged) wife, she would probably tell quite a different story about the hero who “never raised his voice” and who was “always smiling”.

And here comes my problem: this is not the behaviour of a role-model. This is not the behaviour of someone who I would want my children to look up to and emulate, which thousands of South African youth did, and still do, even more so since his death. But sadly, his ‘idol’ status, also lends credence to the fact that adulterous behaviour is acceptable and even, possibly, in the eyes of our youth, quite the trend to follow if one wants to be admired.

Does this type of behaviour bring ‘dignity to our nation’? No it does not, in fact it does quite the opposite. It portrays our men as unethical, disloyal, faithless, amoral, and quite bluntly, ‘unable to keep it in their pants’. Yes, we all know he was just one man, but we also know that (generally) people just love a good generalisation.

We need to be very careful about who we offer as role-models to our children. We need to be much more vigilant about not doing them the disservice of portraying individuals as role-models when they clearly aren’t. Our children need to be very clear about what behaviour entitles one to the lofty heights of heroism. I’m not naïve enough to believe that there aren’t plenty of drugged out, drunken, over-indulged ex-Mickey Mouse Club teeny-boppers out there who our kids hold in high esteem. I know that there is an abundance of gangsta-rapping, profanity-spewing individuals, with pants hanging down off their backsides, who our offspring believe are the last word in wisdom and depth.

But I also know that if we steer our children in the right direction, and that if we’re lucky enough to cultivate relationships of trust with them, when they reach a certain age they will realise instinctively, who is a role model and who isn’t.

Was Senzo a hero and a role-model? There are many who say he was, but we must restrict his Superman-status to the sports field, which is where he excelled and achieved his worthiest accomplishments. He pursued his career goals (look … a pun!) relentlessly and triumphed at a relatively young age. But who’s to say how anyone will end up? Was he destined for international stardom, or would his complicated personal life prevent him from fulfilling such a dream?

There is absolutely no doubt that his untimely death is a tragedy. But let us bear in mind, it was not just the death of a sporting icon, but also the death of just another ordinary, flawed man.