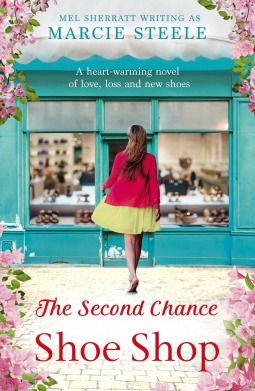 Many thanks to NetGalley and the fabulous folks at Bookouture for my advance copy of this in return for my honest review.

So, as most of you know, this is not my normal type of read lately. I’m more prone to the dark, twisty side. Occasionally though, I do venture back to the bright and shiny side of life and when I do I’m thrilled if it’s for a book like this. I personally dislike the term ‘chicklit’ so I’m not going to call it that, but I suppose that many would classify this into that category.

Riley Flynn is plodding through her life, hoping optimistically (and rather absurdly, at her age, and after the knocks she’s endured) for a ‘happily ever after’. Despite a promising academic outlook when she was younger, she’s landed up managing Chandlers shoe store for quite a few years now despite having had the ability to attain a much more lucrative career. But as one does, she’s grown comfortable and with the support of her colleagues Sadie and Dan, has decided that she’s quite happy staying where she is.

Sadie is mourning the loss of her young husband while dreading the upcoming first anniversary of his death. She finds comfort is caring for her young daughter, and in the online grief forum she’s joined, although she wonders if it’s helping or hindering her ability to move on. Dan is trying to find ‘Miss Right’ but is starting to wonder if dating sites are the right way to go about doing that, as he endures one disastrous date after another, much to the hilarity of his friends.

And then their secure world is thrown into turmoil when it seems that Chandlers might have to close down. Their shoes aren’t modern, they’re not in demand, and they’re prices aren’t market competitive – in fact their high street shop just can’t compete with the stylish mall boutiques that are far more desirable. Not to mention that the ghastly owner is going out of her way to make their lives as miserable as possible, so why do they actually want the shop to stay open?

Marcie (Mel) has created a cosy cocoon of friendship that many people yearn for. Yes, there are misunderstandings, the odd upset, and a couple of nasty people thrown into the mix, but isn’t that just life? Here are characters who wake up every morning intending to head out into the day doing their best – for themselves, and for those around them. They attempt to work around the curveballs that get thrown their way; sometimes successfully, and sometimes not so much.

I especially loved the use of social media in this book. It made it real and current, not only because of its actual use but because of the very genuine struggle that some of the characters had using these channels, and their resistance to change in the approach that social media naturally brings to things like marketing and publicity. It also showed how very rapidly messages spread via social media – specifically Twitter – and how damaging that can be.

Ultimately it’s a feel-good read. Put all those cynical thought aside (if I can manage it, so can you) and just enjoy it. 4 stars from me.