I’m really enjoying the number of books coming out lately with a supernatural theme running through them. It adds even more of an edge to the psychological thrillers that I love!

The Uninvited falls right into this category. There’s a chilling sense of unease running all the way through this from the very first page. Faye and her husband Hugh, together with their kids Aiden and Poppy, move into Cross House, an old, run-down house in a village that’s quite a distance from their old home, but not so far that the children can’t remain at their old school, and they don’t all still see their old friends. But the previous year has held too many bad encounters and negative memories for them to remain where they were, hence their need for a fresh start, and the anticipation of the project of converting the derelict house into a new and modern home for their family.

But from the first minute Faye steps into Cross House on moving day, she senses that all is not right in the house. There is some sort of shift in the air around her that makes her feel that the house might not possibly be as ready for them as they are for it. I found this a bit odd – hadn’t she been to see the house before they’d decided to buy it? There was no explanation around this – whether she’d seen the house prior to arriving that day, or whether she’d been there before and loved it, and may have been surprised to suddenly feel like so differently when they’d arrived to move in.

Anyhow … suffice to say, Faye doesn’t exactly get that brand new start she’s so anxiously looking for. Living in a house that’s being renovated is stressful to say the least, and when she believes that they are being visited during the night by something or someone, the paranoia that prevailed upon her throughout her previous ordeal which she’s desperately trying to escape, returns ten-fold!

Faye decides the only way to take control of the situation is to get to the bottom of their new home’s history. She discovers some old diaries and attempts to engage with an elderly neighbour to uncover the truth that she’s sure is being hidden from her about the tragedy that surrounds Cross House. This proves frustrating, and at times even dangerous. As the tension and fear build, Faye’s questions only multiply.

I desperately wanted to love this book, but just couldn’t. I found that there was so much repetition, as if the reader constantly needed reminding of what had already been described on the previous pages. I struggled to understand the relationship between Faye and Hugh. There seemed to be such a disconnect between them, but then suddenly there was this brief affection, which would just as quickly disappear. I think I battled to understand Hugh’s impatience with Faye. They’d clearly decided on this venture together – moving homes is a huge decision, and taking on a project like this would be quite a monumental task. Yet, there doesn’t seem to be any cohesion between the two of them and Hugh certainly doesn’t seem to be the first person that Faye would choose to turn to when she’s in desperate need of support.

The author does a good job of creating that ongoing sense of foreboding and general darkness that needs to accompany a book like this. The whole paranormal angle worked really well. There was just enough to make you think: could it be; is it; isn’t it?  I also think the title is really clever: who exactly is ‘Uninvited’? Is it the new residents of Cross House who aren’t wanted, or the strange goings on in the house that are so unwelcome by the new occupants? The reader needs to decide. It’s a pity I just couldn’t get to grips with the characters. 3 stars for this one.

Author Bio: J.A.BAKER (she looks quite lovely – not at all like someone who writes scary stories!) was born and brought up in North East England and has had a 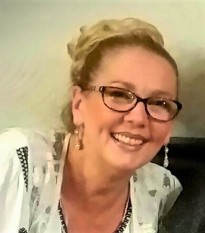 love of language for as long as she can remember.
She has a love of local history and genealogy and enjoys reading many genres of books but is an addict of psychological thrillers.
In December 2016 she was signed by Bloodhound Books who published Undercurrent.
Her second novel, Her Dark Retreat was published in October 2017 and The Other Mother was published in December 2017. Her fourth novel, Finding Eva was published in August 2018

J.A. Baker has four grown up children and one grandchild. She lives in a village near the river with her husband and madcap dog and when not working part time in a primary school, she spends her days trying to think up new and inventive ways of murdering people. (That sounds like a great way to spend one’s time!)

She can be reached on any of the links below and loves hearing from readers.

Thank you to Bloodhound Books, Emma Welton and J.A. Baker for inviting me to creepy Cross House! Take a look at the Blog Blitz and see what others are saying about The Uninvited: