You know when you pick up a John Marrs book that you won’t be getting much sleep! Firstly because you’ll be reading way into the night, and secondly because his books are so thought-provoking (and slightly disturbing, let’s not lie), that they keep you awake as your mind races with thoughts and ideas that you never even knew could exist!

I’ve loved every one of John’s books, (I’m proud to be one of a very exclusive group known as the John Marrs Groupies) but thought this was his best so far. Picture the scene … somewhere, sometime in the not too distant future, technology has progressed to the point that we’re now zooting around in driverless cars!! (I’m a bit too much of a control freak myself, so can’t see myself doing this, but whatever floats your boat – or drives your car – as the saying goes …) So … one fine morning, 8 completely unrelated individuals leave their homes, get into their vehicles, instruct them to go wherever it is they want to go; they sit back and expect the cars to do the rest … and all’s fine and dandy, as it’s been every other day … until it isn’t!

Shortly after leaving their homes, it’s brought to their attention that the vehicles they’re in are actually under the control of a hacker! I’m telling you, the thought of it gives me chills! They’re on a collision course and in exactly 2.5 hours they’re going to all crash into each other and die! There’s absolutely nothing they can do – they’re innocent pawns in someone’s sick, evil game. But wait … keep reading … are they actually as innocent and as randomly selected as we originally think they are?

Meanwhile, a group of government-appointment individuals are sequestered away in a room, deciding on how to rule in accidents that have been brought before them, relating to these self-driven vehicles. Before they know it, ‘The Hacker’ has made contact with them and informed them of his plans, allowing them a quick inside look at what he’s plotting for his 8 vehicles, before broadcasting the entire proceedings onto international social media channels for the world to vote on who should be allowed to live, while the others continue on their collision course!

This puts the whole concept of choice, responsibility, judgment, prejudice, morality, perception and control into an entirely new light! And it led me to thinking … are we actually passengers in our everyday lives? How much control do we take? Do we sometimes feel like things get so hectically insane that our lives have been hacked? We need to realise that our lives are our own and we do have it within ourselves to take control and make our lives what we want them to be!!

This is a brilliant fast-paced story that has so many twists and turns that they’re impossible to anticipate. You’ll question every single character in the story, before questioning yourself. You’ll think you’ve got the answers before they’re cruelly snatched out of your hands. You’ll find yourself challenged by numerous moral choices, and then you’ll be faced with judging each of Marrs’s character’s and their integrity before turning on yourself once again. And you will gasp … over and over, and over again! Oh, and remember to breathe!! I found myself holding my breath so many times it was just ridiculous!!

Since reading this book, I’ve heard mention of self-driving cars in the media numerous times. I’m not sure if this had ever been discussed before and I’d just never paid attention, but now whenever I hear of it, I shiver! And then I want to quickly contact John and tell him about the latest technological advances – although I’m pretty sure he already knows all about them!

This gets 5 huge, enormous, gob-smackingly massive stars from me … actually, I think it should get a whole lot more!!!

I can’t wait to see what John’s got in store for us next time around! Do yourself a favour and read ALL of his books. I’d love to hear which one’s your favourite!

Thank you Tracy Fenton of Compulsive Readers for organising the Blog Tour. It’s been really fabulous being on the John Marrs journey with you for so long now. I’ve loved it and can’t thank you enough for ‘introducing’ me to him! 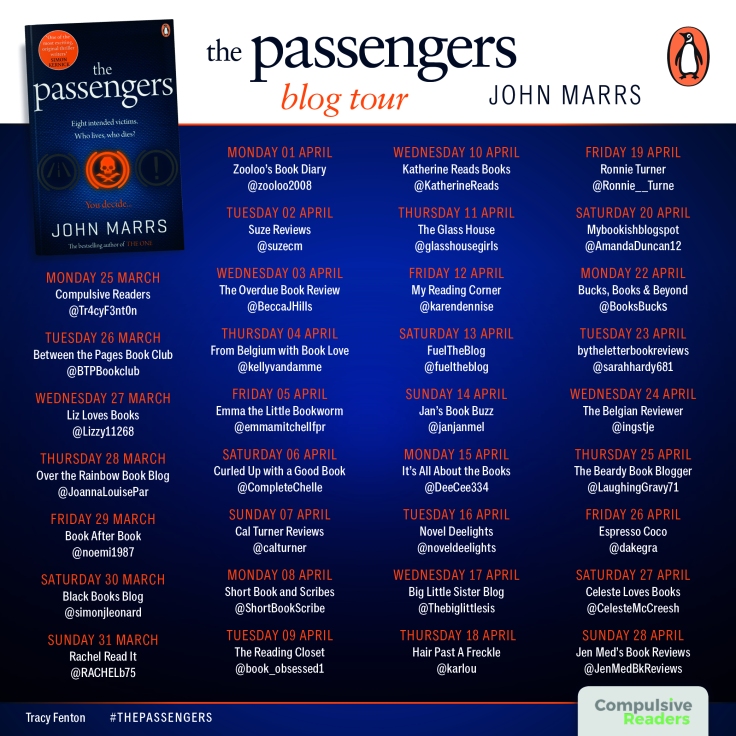