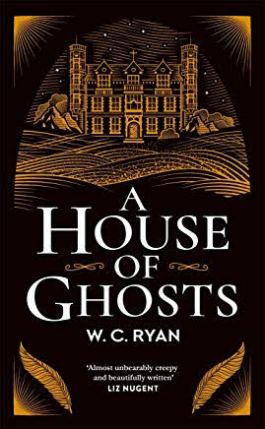 This is so reminiscent of an Agatha Christie thriller; one with a gothic setting!

The story is told from different points of view, with the chapters alternating between characters, although they’re not voiced in first person, but in third person.

So, the scene is set … at remote Blackwater abbey, inhabited by Lord and Lady Highmount and their family for some time, and rather difficult to reach as it’s situated on an island. It’s the winter of 1917 and WWI is still being fought, moving into its most brutal stages. The Highmounts have lost both their sons in battle and are desperate to know – through any means possible – what happened to them and if they are now at peace. They gather together a rather eclectic group of people, including 2 well-known mediums, to attempt communication with the ‘other side’.

Among those gathered is Kate Cartwright, who originally turned down the invitation to attend, but has been coerced to change her mind by her superior in the Secret Service. For Kate is a highly respected code-breaker and a bit of a force to be reckoned with. She has also lost a brother to the war. Her parents are good friends of the Highmounts and will also be part of the group in attendance. Kate is accompanied by Rolleson Miller-White, her former fiancé. Captain Robert Donovan joins the party supposedly as a valet, but is in fact also in the Secret Service, in the business of discovering traitors.

They arrive at the abbey as a storm is setting in. Everyone else is already present as a certain number of people are required in order for a seance to take place. The Highmounts’ daughter Evelyn is there, as are a troubled former soldier and a doctor who is taking care of him. As the curtains are drawn against the ever-encroaching storm, conveniently cutting off the island from the rest of civilization, the atmosphere becomes so tense that it crackles off the pages. Every corner of the abbey lurks with the shadows and spirits of the departed and the living guests can feel their presence. There are even those who can see them!

But most of these guests have secrets to hide; secrets that add to the shadowy intensity of the atmosphere in the abbey. Is what they’re experiencing real, or is one or more of the guests attempting to deceive the others, and if so, then for what purpose?

I loved the supernatural element of this book. The creepy abbey is like a separate character all on its own! I also loved the strong female lead character, Kate. She really was ahead of her time! No swooning and smelling salts for her! The book is a tad long, and I felt that it did lag somewhat about three quarters of the way in – that was when I wanted it to speed up, and for me it just didn’t seem to happen quickly enough. But it got there in the end, which I was happy about!

This is a 4 star read, which I’d recommend for anyone who loves a good historical gothic novel.

Thank you to Tracy Fenton of Compulsive Readers for inviting me along for this one. Take a look at what these bloggers are saying about A House of Ghosts …