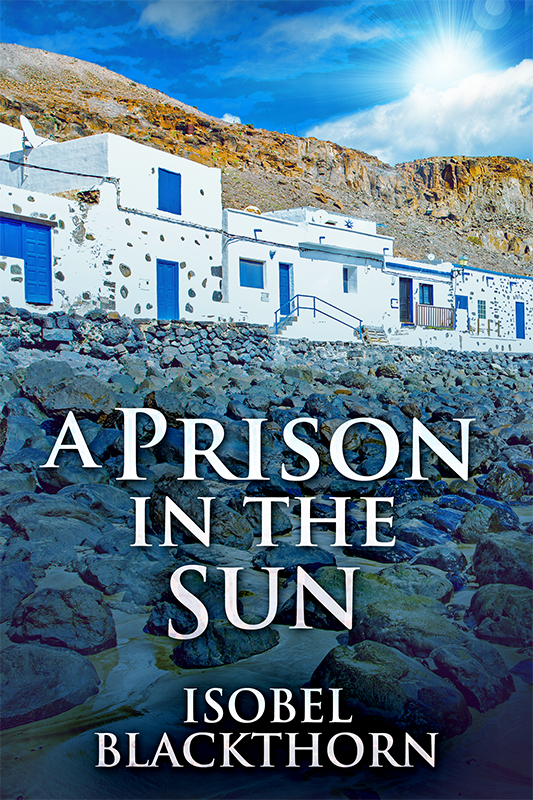 Trevor Moore has decided to take a three-month break from his life and has rented a rambling farmhouse in Fuerteventura, in the Canary Islands. He arrives there, miserable and partially depressed after the breakdown of his marriage, his wife having left him for another woman. His work as a ghost-writer, although generally plentiful enough has started to annoy him, especially when he discovers that one of his most difficult clients – the one he disliked the most – is up for a prestigious award and will most probably win – and all of that work was his! But he’s brought himself to this island retreat to finally write a book of his own … if he could only find something to write about! The author’s depiction of the area brings it to life, and I felt that I wanted to reach in and shake Trevor to tell him “Look, look how Isobel Blackthorn has told readers about where you are!! It’s like the scenery jumps onto the pages, asking to be described!”

Moore seems a bit of a dud right from the start, sitting out in the sun and suffering from painful sunburn almost from day one, joining a gym and immediately feeling inferior to every single other man in the place. He just acts like a loser all the time, so much so that instead of feeling sorry for him, I found that he began to just irritate me! He’s scared of everyone and everything – even his own shadow! Slowly though, he adjusts to some sort of routine, although he remains wary of all the strangers who he suddenly finds in his life. But he’s also slowly made aware of the history that he’s surrounded by, and discovers that the area right next to the farmhouse where he’s staying was used as a prisoner of war camp – actually more of a concentration camp – during the time of Franco’s rule, It was a place of extreme cruelty and was specifically used to house men of a homosexual persuasion,

He also discovers that nearby there is a memorial site for those lost in a horrific parachute accident many years previously. It’s far off the beaten track, hidden from the road, and like the camp, it’s not spoken of. Another place of shame. His island home seems to be surrounded by them. And despite all of these stories that he’s hearing, he still can’t seem to formulate any inspiration for this book he’s meant to be writing. Until the day when he’s out exploring, and experiences one of his regular mishaps – almost drowning due to misjudging the tides – he discovers an abandoned backpack. There’s a large sum of money inside, but also what seems to be a bunch of papers telling the story of someone who may have lived on this very same island long ago. Could this be what Trevor needs to get his creative juices flowing?

I would have loved to learn more about the history behind the island, but there just wasn’t enough information about that in this book for me. It focused more on Trevor and his journey to finding himself, which I’m not even sure he actually does. It’s incredibly repetitive: Trevor’s constant obsession with his questionable sexuality. He starts off adamant that he’s a red-blooded, heterosexual male – he very clearly isn’t, as he repeatedly reminisces about his teenage best friend, and constantly mentions the men he can’t stop staring at in the gym, and what he eats each day. His best friend and agent, Angela (herself a gay woman) also reminds him (in her strange, brief Skype interactions) that she has always questioned his sexual orientation – something that he gets angry at every time she mentions it!

My rating for this book is 3 stars – I did like the aspect of a newly single man in his mid-forties (I think Trevor is around this age), at a loss as to how to find himself. So many similar books tend to have protagonists who suddenly find themselves in this situation and are absolutely thrilled about it, running around not knowing what to do first, and ready to try every single new experience now available to them! Trevor is quite the opposite! He’s single again, not necessarily by choice and not even that happy about it. And he has no clue how to navigate his new reality. He’s socially awkward and basically clueless. So overall, this very different perspective was quite refreshing!

Isobel Blackthorn is an award-winning author of unique and engaging fiction. She writes dark psychological thrillers, mysteries, and contemporary and literary fiction. Isobel was shortlisted for the Ada Cambridge Prose Prize 2019 for her biographical short story, ‘Nothing to Declare’. The Legacy of Old Gran Parks is the winner of the Raven Awards 2019. Isobel holds a PhD from the University of Western Sydney, for her research on the works of Theosophist Alice A. Bailey, the ‘Mother of the New Age.’ She is the author of The Unlikely Occultist: a biographical novel of Alice A. Bailey.

Thanks to Rachel of Rachel’s Random Blog Tours for the opportunity of joining this blog tour. Take a look at what other bloggers are saying about A Prison in the Sun … 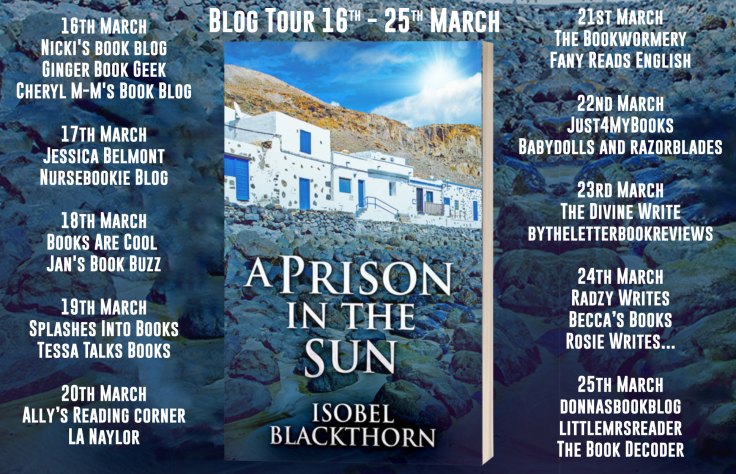