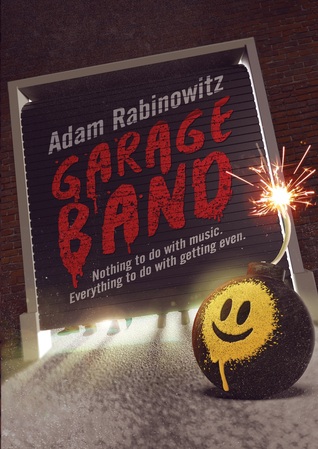 Adam Rabinowitz presents us with a raw, gutsy and thoroughly entertaining caper, carried out by the most unlikely protagonist. Lanthus Trilby, our hero, represents Everyman:  every man (and of course, when I say man, I mean woman too) who has ever been put down, belittled, demeaned, ignored and unappreciated.

Over the last 17 years, Trilby has loyally worked for South Africa’s largest insurance company, Eastland. He has given them his all without question, day in, day out, (and some nights too) after which he then returns home to a nagging, dissatisfied wife and 2 cheerless teens who prefer to behave like he doesn’t exist.

But on the day that Lanthus is unceremoniously told that he is about to become superfluous to the company’s needs, something inside him snaps. He is sick and tired of being a nobody, fed up with being ignored, and has had quite enough of being taken for granted. He decides that the time has come to strike back, and he knows exactly how and where to do it!

It is quite fortuitous that while he is down at the local pub drowning his sorrows and pondering his next move he happens to meet Reyno, an explosives expert (we should all have one of these in our lives – I can see you all heading off to the nearest bar to find one!).  Reyno fully understands his new acquaintance’s predicament and willingly assists Lanthus in putting together what could probably be considered a rather unconventional, although highly skilled, team consisting of a hacker, a female cage fighter, and a pair of acrobats pilfered from the popular Madame Zingara travelling circus!

What follows is a riveting, roller-coaster of a romp as our quirky crew endeavour to pursue justice at all costs. Lanthus and the hacker, Jason, are the only members of the group whose characters we learn any background about – purely because they’re the only ones whose backgrounds bear any relevance to the storyline. However, I became so involved with the action and everyone involved that by the end I really wanted to know more about all of them.

The plot is skilful and clever, and most of all, it’s based on a theme that so many of us will easily identify with. Joburg locals will get an added kick from the inclusion of many recognised landmarks, most notably, Sandton City (which you’ll look at with new eyes after reading this; I know I do!).

This book is an extremely exciting entry onto the South African fiction landscape. I know that I always preach the mantra ‘Be Bold’ to all SA authors I interact with, and I’m going to be exceptionally bold here and I’m going to mention two little words …  FILM RIGHTS … (I’ve even put them in bold – see?) I’ll just leave that there, then.

Oh, and also, I do think a sequel would be very brilliant … please!!

Many thanks to the author, Adam Rabinowitz, for sending me an advance copy of the book in exchange for an honest review. Garage Band is due for publication on 1 April 2016.