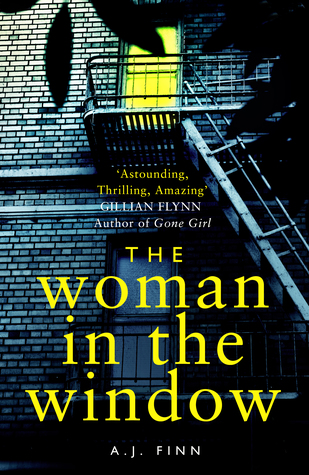 Child Psychologist, Dr Anna Fox hasn’t left her apartment in 10 months. She manages surprisingly well without setting foot into the outside world. She stays connected through her online chat groups, where she’s able to help other ‘Agoraphobes’. She can order all her groceries online and they get delivered. She can also order all her cases of wine, and all her prescription medication and it conveniently arrives on her doorstep. She can communicate with her therapist via Skype or cellphone, and similarly, her absent husband and daughter are just on the other end of the line, aren’t they? So really, why on earth would she ever need to leave her safe cocoon? Even the simple act of opening the front door fills her with dread. And if an emergency does arise, her downstairs tenant Daniel is there to help out.

So Anna passes her time learning French online, watching old movies (very cleverly woven into the narrative), popping pills, drinking wine while she watches all the goings on in her neighbourhood (quite closely) through her camera and telescope and has a pretty good idea of who’s doing what, and with whom! That’s how she first sees the Russells, who move in across the way from her. Their son comes over with a gift and they immediately get along. Soon after, his mom shows up and Anna is surprised at how much she enjoys her company – it’s been a while since she’s allowed herself to befriend newcomers. But then, not long after that, his father pays her a visit and the feeling she gets is one of distinct discomfort. Things escalate fast from there and shortly after that, while watching from her window, Anna witnesses a horrific incident … or does she?

This is a disturbing, dark look at how one can quickly lose clarity when you’re being manipulated without even realising it’s happening. I was left wondering: “Could it happen to anyone? Could it happen to me?” It’s psychological noir at its best. The description of what it feels like to be stuck in the terrifying grip of agoraphobia is so graphic that it might make you fear walking out of your front door yourself! On the other hand, it also allows one a look at how possible it actually is to live without having to leave the confines of one’s home.  I couldn’t help but be fascinated by this!

It took me a couple of chapters to get into this book, but once I did, I couldn’t put it down. Anna intrigued me. While it’s obvious that she’s a protagonist who would invite sympathy, or at least empathy from readers, I never found myself feeling sorry for her. At times I felt slightly angry with her, and I’m not sure she’s particularly likeable, but she is engaging and Finn has crafted Anna’s story (because this is very much Anna’s story, despite the other characters and their necessary roles) in such a way that I was reading into the early hours of the morning.

Highly recommended for those who love good, twisty psychological suspense!