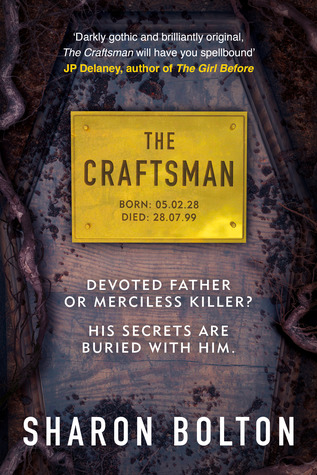 I’ve been waiting and waiting to share this cracker of a book with everyone … and finally it’s my turn!! A new week, and my turn on the Blog Tour for The Craftsman by Sharon Bolton! Thank you so, so much to Tracy Fenton from THE Book Club and Compulsive Readers, and to Trapeze Books over at the Orion Publishing Group for inviting me!

In 1960’s Sabden, a Lancashire village located in a valley just south of Pendle Hill, folklore and legend still govern much of the lives of the inhabitants, although they speak of them in whispers. For this is witch country – the witches being those infamous Pendle witches of the 1600’s. The Pendle witch trials are indeed among the most famous witch trials ever to be recorded in all of history.

And so … Bolton sets the scene for one of the most atmospheric and chilling books I have ever read!

WPC Florence (Flossie) Lovelady has the misfortune not only of having a name that begs others to make fun of her, but also to be the only female member on a police force in this small town where females with brains are not exactly appreciated or required. Her colleagues expect her role to be that of making the tea or typing up their notes. However, Florence has other plans, especially as 3 teenagers have gone missing and Sabden is in quite the frenzy with no clues, no ideas, and no leads whatsoever.

Any suggestions she makes are met with sneers and utter contempt from her team, and I found this so frustrating. As much as she tries to play down the fact that she is obviously cleverer than all of them put together, she just cannot get them to like her. The only one who tries to support her is DC Tom Devins, who attempts to explain how she can get the others to listen to her – usually to no avail. Even when she is right, she is reprimanded and ridiculed. Bolton depicts the typical small town sexist attitudes of the era perfectly, and as annoying as it is to read, it is spot on.

As Florence attempts to get to the bottom of the teenagers’ disappearance she feels as if she’s being thwarted at every turn. People who she thought she could trust suddenly don’t seem to be who she thought they were, and she’s not sure why she feels that everyone is hiding something.

Using themes of witchcraft, legend, mythology and folklore, Bolton weaves an eerie and twisted plot around the village, to the point where you can almost see the mist rising out of your kindle! The Craftsman is a predator so evil that one can barely begin to imagine the fate that he had planned for his victims: a fate so ghastly, and made worse by the fact that he intended to practice until he got it right!

The question is though: who is The Craftsman?

Once you pick up The Craftsman you won’t be able to put it down! It gets 5 big glittery stars from me!