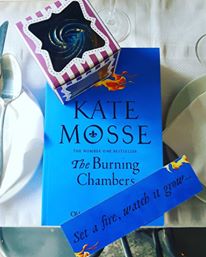 The recent Kingsmead and Franschhoek Literary Festivals brought with them our annual fix of visiting international authors. Although we are certainly not starved of outstanding local South African authors, there does come a certain element of a thrill that ripples through our bookish circles when we hear which ‘big’ names will be visiting us!

As was the case when we heard that Kate Mosse (of ‘Labyrinth’ fame) would be in town to launch her new book, ‘The Burning Chambers’. Even more excitement ensued when it was rumoured that this new series, of which this is the first book, had its roots in our very own Franschhoek Huguenot history!

Thanks to the fabulous organisational skills of the clever magic fairies at her publishing house, Pan MacMillan, I was lucky enough to chat to Kate one morning on her jam-packed visit to Johannesburg. I can attest to the fact that she is utterly engaging and delightful (as I had seen at her launch the previous night in Hyde Park), and chatting to her was like chatting to someone I’d known for a very long time!

To my surprise, I discovered that Kate had studied English, which she has always loved, and not History at university. I had assumed, with her descriptions and vast knowledge of all the historical detail that goes into her books, I would have thought that History would have been a vital element of her studies. But Kate describes herself as a storyteller, not a historian. She explains that she’s crafting and creating stories where history is the backdrop.

Kate always wanted to be ‘a reader’ … not necessarily a ‘writer’! So after leaving university in 1984, she went to work in publishing and landed up doing that for close on 8 years! But she didn’t want to work her way up to becoming CEO, she had more important things to do!

In 1991, she’d already started setting up the groundwork of what would become the Women’s Prize for Fiction (it was originally known as the Orange Prize), the first of which was awarded in 1996. This is the largest annual celebration of women’s writing in the world and celebrates international fiction throughout the world written by women. Kate is a firm believer in creating a community of female authors, and that is what this prize, which has extended to become a wider project, is creating.

Kate also sits on the Executive Committee of Women of the World. She was awarded an OBE in 2013 for services to literature and women and was named Woman of the Year for her service to the arts in the Everywoman Awards. She is also the Deputy Chair of the National Theatre in London. But don’t be fooled, this lovely, warm, powerhouse of a woman is also extremely humble about all these titles and achievements (of which I’ve named only a few), claiming that these are her way of serving the creative arts community of which she is so deeply fond. Incidentally, her whole family is involved in the arts.

But I was itching to get onto the actual writing of those amazing books of hers. Kate’s renowned for atmospheric, well-constructed and crafted stories, woven with just the right touch of magical myth and folklore … and sometimes even a ghost or two. She tells me that this type of thing has always interested her (me too!): legend and mythology that gets wrapped up in the history of a place. She believes that the extent of the illusion that’s created by the handing down and re-telling of these stories contributes to how much of each story will be believed by the listeners. Are they real? If so, how much of them is real? Are they just urban legends? It all depends on how the story is told and what’s then done with that information. I absolutely loved Kate’s view of this, and found it so refreshing – a strange thing to say when talking about things like what many consider just old wives tales and traditions, I know – but I’d never thought of it that way.

Kate tells me that at least one third of her reader base is made up of men, which is quite unusual for a female author. But she says that considering her books are historical fiction, mixed with some adventure and a tot of crime, she’s not sure what exact genre they’d fit into, so she has a wider appeal.

I asked her about about her very obvious love affair with Carcassonne and the Languedoc region in France. Kate replies that she first visited the area in 1989 and it was love at first sight. To be able to write about a place, she needs to know it, and feel it “under her skin”. To Kate, the landscape is truly the main character in each of her books. So she needs to get to know a place so she can genuinely write details such as ‘where the shadows fall’.

That said, Kate goes on to say that knowing everything she’s going to write, before she actually writes it would make for pretty flat writing! Discovering things as she goes along is one of the things that keeps her inspired. This is one of the reasons that she does all of her own research. While writing a first draft, she writes for 7 days a week, 8 hours a day! And once that draft’s finished … the real work begins!

So … on to The Burning Chamber. It started off as the first book of a trilogy, but Kate now says that she thinks that’s going to be extended to a series of four books, not three! Quite an ambitious undertaking!

The book was inspired by Franschhoek in the Western Cape in South Africa. When Kate visited the area for the first time, she visited the Huguenot museum, and reading about the history of the Huguenot people made her immediately realise that she wanted to write a book with its heart based right here! And so, the first inklings for this new series were born! She started thinking about stories of home, and of being told about stories of home being handed down through generations. Stories that are told so lovingly and longingly that when younger generations visit these places, they recognise them, even though they’ve never been there before!

This is a story about everyday people living out their lives side to side with their neighbours – of varying religions (mainly Catholic and Protestant). All getting along until events that happen elsewhere, somewhere far away, devastate them in such a way that in an instant their lives change and they are catastrophically turned against each other.

Ultimately though, Kate says that this is a Romeo and Juliet story!

I suggest you go out and buy your copy and immerse yourself in it as soon as you possibly can! This is one of those stories that will transport you far away from where you are now, and as it’s coming up to holiday time, then it’s absolutely perfect! 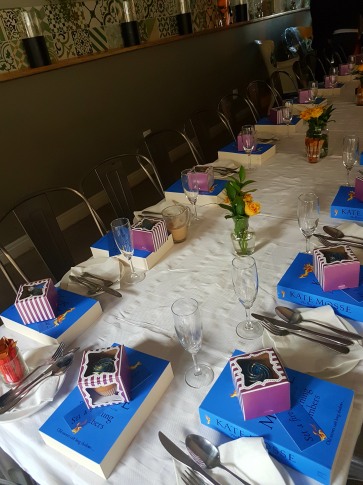