Ooooooh … don’t you love stories set in small villages? Quirky people, suspicion lurking around every corner, dark undertones that abound in almost every interaction. J.A. Baker dishes it all up in spades, from the minute Ray, the newcomer to Whitchurch, walks into the local bar, and silence suddenly and noticeably descends on the place!

Ray has ditched city life in Birmingham after splitting up with his girlfriend, although her mother, Delores, still seems to stalk him unrelentingly! He’s looking for a quiet unassuming life in a quiet unassuming village, so here is in a bit of a run-down cottage, far removed from his previous life. Pretty typical for villagers, the locals are wary of newcomers, especially in light of recent strange goings-on, which I always find odd, because why would you be suspicious of newcomers when odd things have been happening before they even arrived?!

Anyhoo … Lily, the friendly young barmaid is the first person to befriend Ray – well, she’s the first person willing to actually talk to him and explain why everyone’s so cagey. But soon after he arrives he too falls victim to whoever is plaguing the locals, being on the receiving end of threatening letters and doggie dirt smeared on his car! There’s no better way to integrate and become one with the other inhabitants than to also be exposed to the same risks and danger that they are.

As the story progresses, even more mysterious incidents occur, including a child who disappears for a few hours, only to walk out of the woods a few hours later, disoriented and unable to recall where they’ve been or what they’ve been doing in the time that’s elapsed since their disappearance. Who or what could be responsible?

Interspersed with short chapters about “Me”, someone who tells the reader all about their absolute enjoyment at how evil they are, not giving away their gender, and leaving anything and everything to our imaginations, the narrative is perfectly (although, rather breath-takingly) paced!

I loved J.A. Baker’s previous book ‘The Uninvited‘, about a spooky house. She masterfully transfers her skill for chilling writing onto the village of Whitchurch, where you can almost picture the mist hanging over the woods as you try to see who’s walking towards you, out of the shadows (I suppose the book cover may have had something to do with putting that image in my head)! 4 shivery stars for this one! 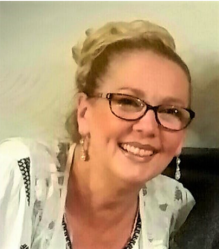 J.A. BAKER was born and brought up in North East England and has had a love of language for as long as she can remember. She enjoys reading many genres of books but especially enjoys psychological thrillers. When she’s not busy writing, she can be found trying to keep on top of her high maintenance garden!
In December 2016 she was signed by Bloodhound Books who published Undercurrent.
Her second novel, Her Dark Retreat was published in October 2017. Since then she has written four other novels – The Other Mother, Finding Eva, The Uninvited and The Cleansing which is her latest release.
J.A. Baker has four grown-up children and a grandchild and lives in a village near Darlington with her husband and madcap dog.
You can find out more about J.A. Baker by visiting her website at
http://www.jabakerauthor.co.uk/
www.facebook.com/thewriterjude
www.twitter.com/thewriterjude

Thank you to Bloodhound Books for arranging this blog blitz. Follow along and see what other book bloggers have to say about The Cleansing …