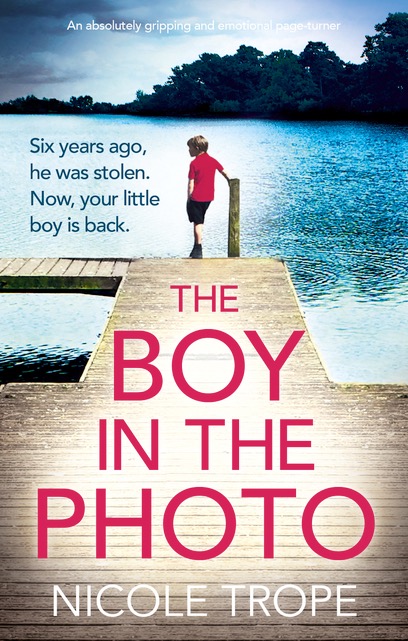 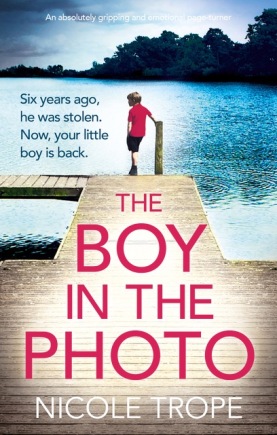 So excited to be here on publication day for Nicole Trope’s The Boy in the Photo!

It’s every parent’s worst nightmare: having something happen to your child. Megan arrives at school to collect her 6-year-old son Daniel one day, only to discover that he’s nowhere to be found because he’s already been collected by his father Greg – her ex-husband; the husband she finally had the courage to escape from, divorcing him after suffering years of control, abuse and cruelty. The police are contacted immediately – how difficult could it be for a man and child to simply disappear? But that’s exactly what they’ve done and Greg has ensured that they’ll never be found.

Six years later Megan has re-married and has a baby daughter Evie, when Daniel walks into a police station in a remote town not far from where Megan now lives, and tells them who he is. She can hardly believe it! The son who she never gave up hope of seeing again, is finally coming home! Only, when she goes to collect him, she discovers that he’s cold and distant – not at all the same as the warm, loving child he was before. What has happened to her Daniel in the six years he was gone, and is there any hope in him ever really coming back to her?

Nicole Trope does a sterling job of drawing us into a family in the midst of devastating trauma – at first when we witness Megan’s sheer heartbreak at losing her son for the first time, and then again when she finds him, only to feel like she has lost him all over again as she realises he will never be the child she envisaged. Even though this time she has her kind, supportive and patient husband by her side, he will never understand that what she is feeling just cannot include him – even though he was the investigator on the case when Daniel was first reported missing and swore to her even then, that he would be found. So even though he does have his own invested interest and care in Daniel – it’s completely different to that of being his parent.

Trope gets to the heart of her characters. Her portrayals are extremely well-rounded and real and she holds back from going overboard. Daniel’s realisation that his father has poisoned his entire childhood and memories of his mother is painful both to him and to the reader. I imagine that the research involved would have been even more so.

This is a heartbreaking story of a family wrenched apart, only to be put back together like a jigsaw puzzle … with the pieces in the wrong places. The writing is excellent and riveting from the very first page. You’ll feel your stomach twist in anticipation with each turn of the page. 5 tingling stars for this one – and I’ll be looking for other books by Nicole Trope. I feel I’ve missed out by not having read them! 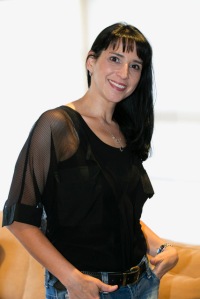 Nicole Trope went to university to study Law but realised the error of her ways when she did very badly on her first law essay because-as her professor pointed out- ‘It’s not meant to be a story.’ She studied teaching instead and used her holidays to work on her writing career and complete a Masters’ degree in Children’s Literature. After the birth of her first child she stayed home full time to write and raise children, renovate houses and build a business with her husband.
The idea for her first published novel, The Boy under the Table, was so scary that it took a year for her to find the courage to write the emotional story. Her second novel, Three Hours Late, was voted one of Fifty Books you can’t put down in 2013 and her third novel, The Secrets in Silence, was The Australian Woman’s Weekly Book of the month for June 2014.
She lives in Sydney with her husband and three children.

Thank you to the fabulous team at Bookouture for inviting me on this tour. Look at what these other bloggers have to say about The Boy in the Photo this weekend … 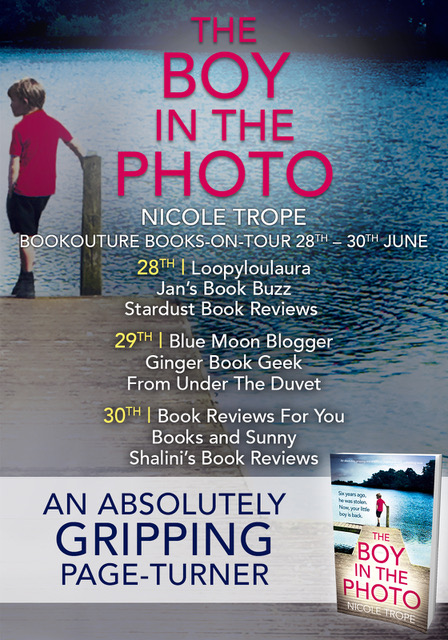