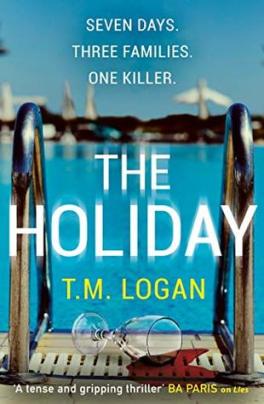 It’s publication day for The Holiday!! Congratulations T.M. Logan!! And I have just 5 words for you … COULD. NOT. PUT. IT. DOWN. So much so that I told Mr Tim Logan that it would be every so nice of him to come and feed my family until I was done as all the adulty stuff was getting in the way of my reading!! He kindly offered to do beans on toast. (I forgot to mention he’d have to catch a flight to South Africa before actually making this gourmet feast!!)

So … what’s it all about? Kate, Rowan, Jennifer and Izzy have been best friends since university and even after that when their lives went off in different directions, they tried to make the effort to take an annual holiday together. But for the past few years, what with family and work commitments, somehow that’s fizzled out. However, they’re all turning 40 this year and have decided that together with their families they’re going to splurge on a luxurious holiday at a villa in the French countryside. What could possibly go wrong?

I must be honest, I could think of nothing worse!!! Best friends is one thing, but introducing husbands and children into the mix is an entirely different sort of animal! Firstly, just because you’ve been friends for years, doesn’t mean your husbands necessarily are. Secondly … kids of varying ages and stages … and … teenagers!! Thirdly, on that topic … vastly different parenting styles and opinions!! It’s actually a recipe for disaster.

From the very beginning, the scene is set … Kate has suspected for a while that something’s not quite right with her hubby, and picking up on a trail of clues, starts to realise he’s having an affair with one of her friends! But which one? It’s almost immediately apparent from the outset that each one of these women is hiding something from the others and Logan masterfully leads his readers on a merry-go-round of epic, roller-coaster-like proportions! Twists and turns abound as we jump from one assumption to the other. I almost felt like I needed a neck brace by the time I was done! Suspicion and secrets are in abundance! The sense of unease is almost palpable, and one can almost feel sorry for everyone, ‘trapped’ (as much as one can be in a luxurious French villa surrounded by vineyards) in the stunning, sultry surroundings that they’re in, as their dream holiday slowly disintegrates into a nightmare.

It’s a race to the finish as we swipe (turn) those pages, to find out exactly who’s hiding what from whom, and who’s. None of our protagonists is particularly likeable, and I’m sure that’s deliberate – you can’t wait to accuse one, and then the other … and then the other! And if you think the women are bad, wait until you meet the rest of their families. In that desperate quest for ultimate outward perfection, the term ‘dysfunctional’ does come to mind! I couldn’t help wondering just how close to the surface of actual fact this came. In our online ‘reality’ where everything has to look good and ‘seem’ beautiful, how much is swept under the rug in order to achieve that perfect facade? Logan delves into the dark side of how our digital obsessions can be used against us, and how careful we need to be. We are far too nonchalant about what we do and say, not realising who’s listening and what they’re doing with the information.

The ultimate message remains: how well do we know those who we assume are closest to us? How far will we go to protect the ones we love … even if it means turning against others who we love? How do we define the different types of love: long-term friendship, a spouse, a child … what is the ultimate definition of love?

This is a 5-star thriller of a read! (Actually I’d give it at least a couple more stars if I could!)

Tim was born in Berkshire and studied in London and Cardiff before becoming a national newspaper journalist. He currently writes full-time and lives in Nottinghamshire with his wife and two children.

His debut thriller Lies (2017) sold more than 350,000 copies and was one of Amazon’s biggest selling e-books of 2017. Together with his second standalone thriller, 29 Seconds (2018), his books are now published in a dozen countries around the world including the USA, South Korea, Italy, Spain, Portugal, Poland, Hungary, Serbia, Romania and the Netherlands.

Thank you to Tracy Fenton of Compulsive Readers for inviting me on the Blog Tour. Look at what other bloggers are saying about The Holiday …