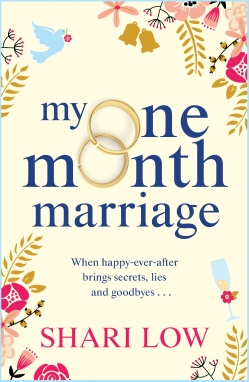 Oh my word, I adored this book! Why have I never read anything by Shari Low before?!

Four sisters: Zoe, Marina, Verity and Yvie … all so different in every single way. Marina is the only one who’s married and she makes helicopter moms look lazy and uninvolved! Zoe’s the corporate, marketing wizz; Verity’s a bit of an introverted schoolteacher and Yvie’s the happy-go-lucky one, always there for everyone, never down and just perfect for her job as a nurse.

The story begins with Zoe (who I figured half-way in was actually least likely to get married), realising that her marriage is over … after just one month! She calls her sisters together and confronts them with the question: “Which one of you slept with my husband?” Told in a mish-mash of timelines from everyone’s point of view it sounds like it would be rather convoluted and difficult to follow, but it absolutely isn’t! Once you figure out who’s who, who fancies who and who belongs where, you’re A for away! It’s fabulous!

Shari Low’s characterisation is amazing. If I were to pick one person who I wasn’t particularly fond of, I’d say it would probably be the girls’ mother, but even with all her self-absorbed nonsense going on, she stays true to form throughout.

As an only child (who has four of her own children), I’m so intrigued by the dynamics of large families. All those constantly shifting dynamics are so fascinating. Each personality tends to trigger another and everyone can become so volatile in just an instant, even those who appear to be the most passive ones in the pack. This was really well depicted.

This is a solid 5-star read! I couldn’t put it down! Thanks to Boldwood Books for inviting me on the Blog Tour. Take a look at what other bloggers are saying about My One Month Marriage …