Welcome to the world of the delightful Sophie Johnson! Smart, intelligent, not bad looking, but has dismal luck with men. Also, her job description at top fashion magazine Modiste, is ‘Sales Executive’ but falls sadly short of the mark as all it entails is sitting on the phone attempting (usually unsuccessfully) to sell advertising space, rather than swanning around, being all sophisticated and attending classy events with her shiny, elegant colleagues. Thank goodness for her one decent co-worker, Mark.

So Sophie tends to spend evenings at home in her flatshare with her lovely flatmate, Mel, trying to fend off calls and messages from her last disastrous relationship, who doesn’t quite understand that it’s over! Why can’t romance be like it was in the good old days, she wonders? And then one day, when Mark is trying to convince her that it’s a good idea to check out the ads in competitor’s magazines, she spots one for ‘The Jane Austen Dating Agency’ Ha! Just what she’s been dreaming of! Sophie has visions of romantic, dashing young men sweeping her off her feet and being oh, so verrrrry ‘nice’ (but in a good way – not a creepy way)!

She quickly decides to apply, and although it’s not quite what she had in mind, (the snooty madam who interviews her has never even read a Jane Austen book!!!) it takes Sophie on a fabulous adventure and a journey into a whole world that opens up to her … a world that she discovers was waiting for her all along: beyond her boring job and her colleagues who look down their noses at her; beyond spending nights at home doing nothing.

But this new world is just as fraught with people willing to judge you on how you look, how you dress, and what you do, and Sophie is initially rather intimidated by the snobbish attitudes that she encounters. She needs to break out and discover her own inner strength in order to know her own worth and who she herself is, before she really knows what kind of man she’s actually looking for! And she also needs to learn how to be more discerning about the people she associates with, and how she judges others. But in the meantime, the reader gets to both laugh and cringe with her along the way!

This is such an enjoyable read. Sophie has a little bit of jaded Bridget Jones in her, with just a dash of wide-eyed Bambi in headlights thrown in for good measure. Fiona Woodfield has a good grasp of people and her writing has an effortlessness about it that makes for easy reading.

4 stars for this one, and I can’t wait to see if there’s a sequel.

Thank you to Bloodhound Books for inviting me to read an advance copy and to participate in this publication day party! Look at what these bloggers have to say about The Jane Austen Dating Agency … 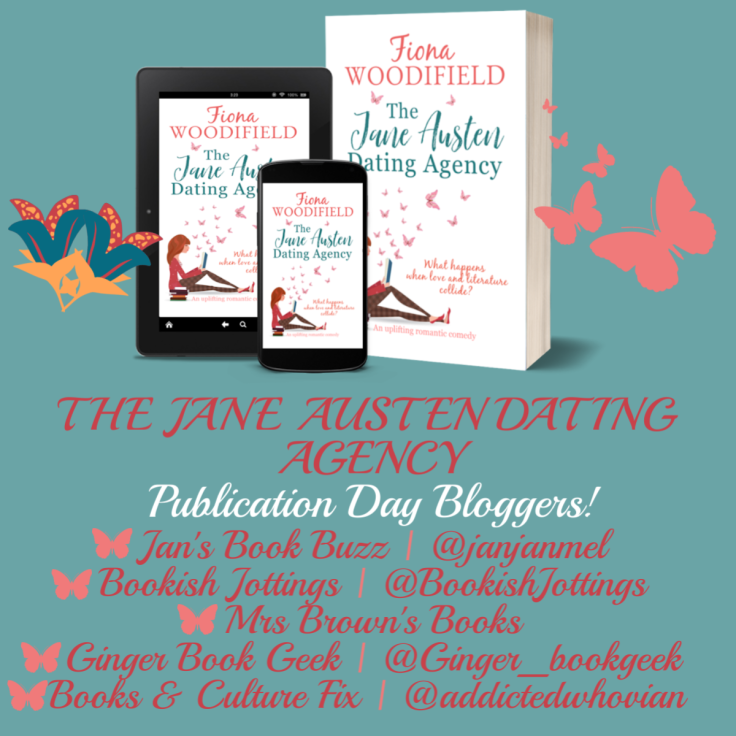 As a young child, Fiona spent hours reading, curling up with a book was one of her favourite past times. Her current volume would accompany her everywhere, to school, on daytrips, holidays and visits. The idea of providing an imaginary world in which others can escape is a wonderful one and this became Fiona’s dream, to become a published author.

From an early age, Fiona’s parents encouraged her writing – commencing when they gave her a simple red lined exercise book. Soon she had a collection of notebooks, small, large, plain, The Snowman, Brambly Hedge, they all became full of her jottings.

Years later, Fiona studied for a Combined Arts Degree at Durham, then a Masters in English – writing her thesis on Jane Austen and Masculinity. In total contrast she went to work for a top fashion magazine in London, then various marketing posts. Four lovely daughters later, during which time she has graduated from laughing at Mrs Bennet to sympathising with her, she continued to scribble away, only the notebooks are somewhat bigger. Fiona has written for national magazines on diverse subjects from Jane Austen to caravanning! One morning the idea came to her for ‘The Jane Austen Dating Agency’ and this was the first book she just had to write.

Fiona obviously loves writing, especially romantic comedy, meeting with friends and family, dancing, walks by the sea and escaping into a book whilst consuming a worrying amount of chocolate.