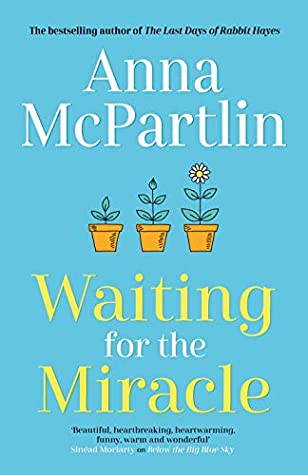 For me, Anna McPartlin is an APA – an Automatic Purchase Author! Anyone who knows me well will tell you that The Last Days of Rabbit Hayes (2014) is one of my all-time favourite books. Ever since reading that, I’ve been completely hooked on Anna’s books! So, as soon as I heard about a blog tour for her new book, I immediately jumped up and down, waving my arms in the air (virtually speaking, of course)!

Once again, Anna has taken a sensitive, often taboo topic, and turned it into an unputdownable story. She can make you cry the ugly cry and laugh out loud, all within the same paragraph! Her particular brand of empathy together with her unique, rollicking wit and humour, are unparalleled.

The overriding theme in Waiting for the Miracle is infertility, but in addition to this, secondary themes also include the treatment meted out to unmarried mothers in Ireland in the not too distant past, friendship, resilience, family values and the fact that sometimes we do get to choose and create our own families.

The story is told in two timelines and I really had no problem keeping up with both. You know that eventually, the two parallel narratives will intertwine but until then, each one is equally riveting.

2010 – Caroline, Natalie, Janet and Ronnie are all members of the same infertility support group.

Caroline and her husband Dave have been trying for a baby for years. But after numerous failed IVF’s and various other surgeries, they’ve agreed that enough is enough. Having their own baby just isn’t on the cards, and that book is closed for them. But Caroline is thinking about opening a new book … even if she needs to do it without Dave.

Natalie and her partner Linda want a baby, but they really want it to have their DNA. Linda’s twin brother Paul is willing to be the sperm donor, but Natalie has her doubts – he’s not exactly the candidate she’d choose if she was paging through a catalogue of options!

Janet and hubby Jim have suffered through countless miscarriages and a molar pregnancy. So the problem isn’t actually being able to fall pregnant, it’s keeping a healthy pregnancy, and carrying a baby to term that seems to be the issue. Are they so drained from their previous trauma that they can’t even hope to try again?

And then there’s newcomer Ronnie. Nobody can quite figure her out. But they know enough to realise that she doesn’t quite fit in with the rest of the group. Will anyone be able to get her to share her story?

1976 – teenager Catherine is brought up on a rural Irish pig farm. She knows that there are bigger, better things out there in the world, but she has no idea how she will ever be able to escape the simplicity and tedium of farm life. However, she is sure in the knowledge that her parents and brothers love her. They are salt of the earth people – they work the land, regardless of the hardships it brings, and they attend church. This is their life and they don’t waver from it. Until Catherine falls in love with a boy who is from a well-respected, well-to-do family. In her naivete, she believes this is her key to freedom that will allow her to escape her future on the pig farm. But when she falls pregnant, she discovers how very wrong she is.

Catherine is shunned by her boyfriend and banished by those closest to her for shaming both herself and the family name. She is packed off to a mother and baby home and suffers the most horrific abuse at the hands of the Catholic nuns who run the institution. Determined that she’s going to keep her baby, Catherine fights tooth and nail against those who now hold her future, and that of her baby, in their hands.

The telling of Catherine’s story is chilling. When you think about it, 1976 is really not that long ago and the background and information that the author gives of these mother and baby homes (now also known as Magdalene laundries or Magdalene asylums) is based on cold, hard fact. To think that thousands of young women were sent away to suffer in the most inhumane ways by the very people who were meant to care for them: their families and the Church … and then to be forced to give up their babies almost immediately after birth, beggars belief! The wrongs done to them can never be taken back and although the Irish government has led numerous enquiries, and also extended compensation to those who have no come forward as having been “coercively confined”, these are scars that will never heal.

Unbelievably, the last Magdalene laundry only closed in 1998 (although some research puts this closure earlier, in 1996)!

Catherine is nothing if not determined, and I absolutely loved reading about her fighting spirit! I also loved reading about Dublin during this time. No matter how rigid and staid society is, as a whole, there will always be those who fall just outside of what’s accepted. When they find each other it’s a beautiful thing. McPartlin’s description of the judgment and discrimination of this era that was experienced by anyone considered to be “other” is harsh and jarring. I felt incredibly uneasy reading about it and knowing that much of this still exists today, and that many people who don’t fit into some ridiculously defined mould of “normality” still experience this treatment.

The two timelines do eventually merge, as you know they will, and whether you see it all fall into place before that, or as it happens, you’re sure to be enveloped by a sense of uplifting warmth and that feeling that you’ve just been witness to something extremely special and unique, which is what this book is.

I’d rate this at more than 5 stars if I could! I adored it. Thank you to Compulsive Readers for inviting me on the blog tour. And an even bigger thank you to Anna McPartlin for writing this gorgeous book, and for being open about her own journey with infertility.