Is it the things we don’t say that haunt us the most?

Clare is anxious to start a family with adoring husband, Pete. When she takes on the seemingly simple task of obtaining her late mother’s birth certificate, she finds herself in a family history search that will challenge everything she thought she knew about her life.

Scarred by her parents’ ill-fated marriage, Tessa lives by three rules – dating unavailable men, building her café into a food empire, and avoiding her father. However, when her carefully planned life is thrown into chaos, Tessa is forced to decide which of these rules she’s willing to break.

As Clare and Tessa’s paths cross and their friendship grows, can they both finally unlock their family secrets in order to realise their futures?

This is one of those books that you’ll want to settle in with, so make sure you have everything you need nearby before you start: tea/coffee/wine, chocolate/biscuits/cake, tissues, ‘Do Not Disturb’ sign.

Megan Mayfair has created two main female characters who are such diametrical polar opposites, you just cannot imagine how each of them would even tolerate being in the other’s space. But it’s exactly because of their differences that they’re able to work so well together and become friends, even though they don’t understand each other.

Tessa is the driven, dynamic, hardened business owner, determined never to be bogged down in a serious relationship and Clare is the socially awkward, quiet wife, happy to stay in the background and content with her caring husband Pete and his big, boisterous family.

We learn though, that what we see on the outside is truly a facade and that one can never know what has created the persona being presented to the world until one has taken the time to get to know that person, what has made them the way are and why.

The complexities of family histories, secrets, avoidances and mistakes are often repeated, and these are so commonly ‘the things we leave unsaid’. Navigating the maze of our own families and personalities is complicated enough without trying to do the same with that of others.

The author deals extremely capably with highly sensitive, often taboo topics such as miscarriage and dementia. Issues that many would prefer to avoid talking or reading about. Here they are both dealt with, with perception and consideration, and many can learn from this. It’s always preferable to create awareness around these matters and to educate others, rather than to shy away from them and create further fear and anxiety through lack of knowledge.

That said, this is by no means a medical manual! It’s a warm and enjoyable read filled with diverse characters, representing a variety of what comprises just a small section of our general population today. You’ll love some and you’ll dislike others … and you’ll probably laugh at a couple too!

I found it interesting and really different to read a book based in Australia, being so used to the more common backdrops of England and America. I’m sure there are many, many more books out there set in that part of the world, but for some reason, I don’t seem to cross paths with them! So it was a refreshing change.

4 Shiny, glittery stars from me for this one!

Still a couple of days left on the blog tour, so see what others have to say: 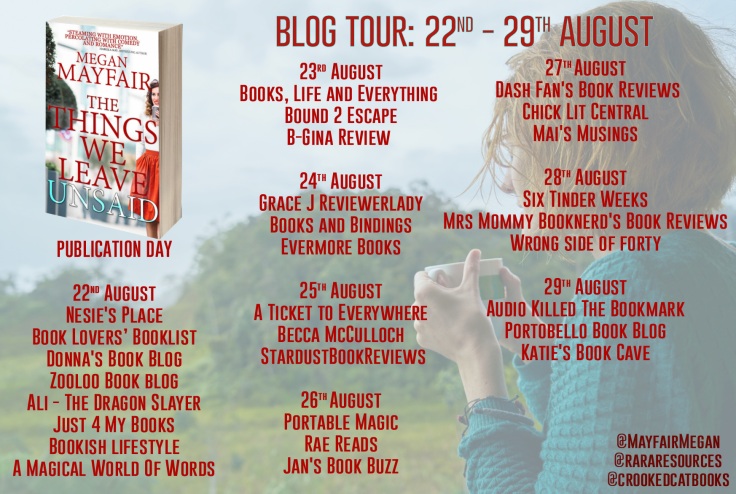 Megan Mayfair is a Melbourne-based writer who draws inspiration from her beautiful hometown and regional Victoria to create contemporary women’s fiction, containing a big dash of romance and a spoonful of family intrigue.
With a background in public relations, copywriting and higher education, Megan is passionate about words and loves to bring them to life on the page. Megan holds a Master of Arts in professional communication and is a member of Romance Writers of Australia and Writers Victoria.
Megan is married with three children, loves a good cup of coffee and believes you can never have too many scarves.